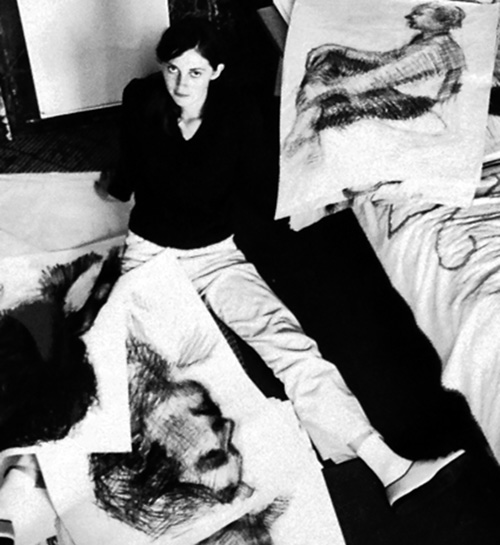 Susanna van Haaren-Hoy was born and raised in ’s-Hertogenbosch, the Netherlands.

As a young woman, while working full-time days, Susanna attended a five-year evening program in the Fine Art Department of the Academie Voor Industriele Vormgeving (now the Design Academy Eindhoven) in Eindhoven. Her studies there included drawing, painting, and design . . . with focused work in portrait and figure.

Having ventured into fashion modeling while still in art school, immediately following graduation Susanna embarked on a 13-year career as a top fashion model. During that time she had assignments with some of the fashion world’s very best magazines . . . like Harpers Bazar, Cosmopolitan, Vogue, Avenue (NL) and Linea-Italiana. This brought her into contact with leading designers Frans Molenaar, Frank Govers and Georgio di Sant‘Angelo and top photographers Neal Barr, Hiro, Alfa Castaldi and George Hurrell.

Having fulfilled her goals as a model and after a brief flirtation with Hollywood, Susanna left the business to build a life with her husband and eventually raise two sons in Paso Robles, California.

Since 2002 Susanna was juried into exhibitions at Fort Lewis College in Colorado and received a “Juror’s Choice Award” in an exhibition at San Juan College in Farmington, New Mexico. In addition she has had solo exhibitions in the Paso Robles Public Library and at Sculpterra and Thacher Wineries in Paso Robles.

Susanna has been a member of SLOPE (San Luis Outdoor Painters for the Environment) in San Luis Obispo, CA . . . and a member of the Plein Air Painters of the Four Corners in Colorado. Recently she was an exhibiting artist at Studios on the Park in Paso Robles, California where for three years she maintained a studio/gallery at Studios, participating in a number of group exhibitions.

With her independent creative spirit, Susanna continues to paint her beloved Central Coast California and currently maintains a studio/gallery in her home.